Parade of Homes showcases unique dwellings in a revitalized market

Tickets can be purchased at homes on the tour or click on the link below to buy tickets through the Lensic:

By Bruce Krasnow
The New Mexican

The swagger is back for Santa Fe home builders. 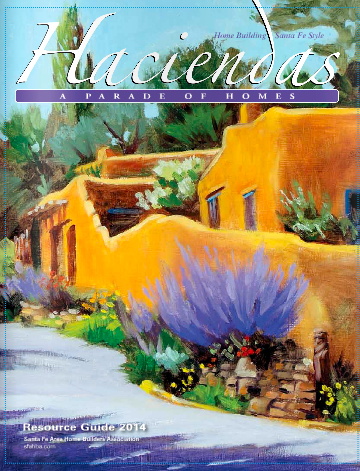 With the opening of the Haciendas — Parade of Homes Tour on Friday, Aug. 15, builders are showcasing 19 homes that stretch the imagination for both Santa Fe style and energy efficiency.

“It’s the best parade that we’ve had in the past 3 or 4 years,” said Bill Deuschle, chairman of the 2014 event and owner of construction company Fabu-WALL-ous Solutions. “It’s a whole other world from what it’s been like the past few years.”

Deuschle said interest in the home tour from both sponsors and builders is strong and this year he expects more visitors to walk through the properties, which stretch from Canyon Road and Museum Hill to Rufina Street and South Meadows Road.

The tour was originally established as a way to market spec homes when builders purchased lots, borrowed money to construct a home and sold it upon completion. That business melted down during the recession, when risk and speculative lending was turned off. Today, most of the new homes and remodels on the tour are owner-occupied or under contract.

Deuschle himself just finished a major remodel off Cerro Gordo Road with a casita, a terrace and portal that showcases the frontage of the Santa Fe River. “It really adds to the ambience, you can see it running, you can hear it running. It’s a spectacular view,” he said.

But the owners, who recently relocated from Texas, were not ready to have 1,800 people walk through the home this year. Deuschle hopes it can be showcased on the 2015 tour.

All the better as the event chairman had dozens of other details to manage before the home tour opening. “As a builder no matter how ready you are, you’re never ready,” said Deuschle. “There are always butterflies in your stomach. Nobody realizes how much a builder puts into the Parade of Homes.”

The homes are judged by other builders and construction professionals as well as the public, which votes on a People’s Choice Award.

The 19 homes this year include a $180,000 property built by Santa Fe Habitat for Humanity volunteers to million dollar-plus homes in Las Campanas and on Circle Drive, as well as a historical remodel tucked behind the Pushkin Gallery on Canyon Road.

The trend is toward more contemporary styles, such as the one at 42 Happy Trail by Praxis Design with a steel doorway entrance and an Asian-inspired garden Deuschle calls “a fusion of contemporary with Santa Fe Style.”

Deuschle said energy-efficiency is no longer an option in Santa Fe as both the city and the county have building codes that mandate a certain level of so-called “green construction.” But seven of the homes on the tour are going beyond the codes and competing for energy-efficient awards by the Home Builders Association.

But many of the energy-saving features are incorporated into the smaller, less-expensive homes, such as a Homewise project in the Tessera subdivision off of N.M. 599, and another by Tom Wade of Palo Duro Construction near South Meadows Road and Agua Fría Street.

Teri Buhl of Evergreen Building Solutions serves on the Green Building Council and works with builders to rate and measure energy savings, a number known as the HERS (Home Energy Rating System).

“It’s actually harder to make a larger home green,” Buhl said. “The purists would tell you that the best energy-efficient home is going to be a small footprint under 2,000 square feet. We have seen a shift in the market to smaller-footprint homes.”

Larger homes might need solar panels and voltaic systems to make up for the longer piping, wall and roof surfaces — the top culprits for air leakage, said Buhl.

In Santa Fe, it’s more about the shell — and making that as tight as possible. This is especially important with the temperature swings at the city’s high elevation that might see a 90-degree day and a 55-degree night.

“We have very unique climate zone. Because we get 35-40-degree temperature swings in one day, it makes it hard to get a house that performs in all the ranges.”